Appalachian Americans are an underserved population

with increased risk for diseases having strong genetic

and environmental precursors. The purpose of this study is to

understand the thoughts and perceptions of genetic research of

Appalachian Americans residing in eastern Ohio prior to

conducting a genetic research study with this population. A

genetic survey was developed and completed by 180 participants

The majority of respondents were Caucasian women with a

median age of 37.5 years. We found that participants had a

high interest in participating in 80 %, allowing their children

to participate in 78 %, and learning more about genetic research

studies (90 %); moreover, they thought that genetic

research studies are useful to society (93 %). When asked

what information would be useful when deciding to participate

in a genetic research study, the following were most

and their child’s genes (84 %), types of biological specimens

needed for genetic research studies (75 %) and who will have

that they were “unsure” about participating in a genetic research

study, the leading reason was “I don’t have enough

information about genetic research to make a decision”

(56 %). We also asked respondents to choose their preferred

method for receiving genetic information, and the principal

response was to read a brochure (40 %). Findings from this

dissemination methods that are tailored for underserved populations 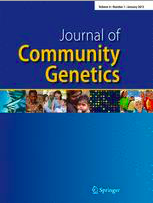