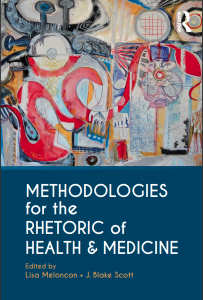 This is a project under advance contract with Routledge and it will have 15 chapters that are pushing the envelope on how we do research in the rhetoric of health and medicine (RHM). It should be out sometime in 2017.

Part of what we argue in the introduction is that the methodologies being employed in RHM should be models or inspirations in how to do research in other related fields. Following is a preview of the framing of the project and words that will appear in some form in the introduction.

As E. Johanna Hartelius (2009) argues, the rhetoric of medicine, as an area of rhetorical inquiry, “currently finds itself in a sort of sub-disciplinary self-reckoning. It faces a critical exigence of identity, like all inquiries do in their own time” (p. 458). Contributing to this exigence are the challenges of accounting for broader health practices, persuading health and medical stakeholders of the sub-field’s value, and relating the sub-field to other areas such as the rhetoric of science and health communication. The proposed volume moves us closer toward defining the rhetoric of health and medicine, less topically than methodologically, less by what it is we do, but rather by how we do it.

We are entering into an important time in the trajectory of focusing on research methods and methodologies in rhetoric and writing studies. Recent special journal issues of Written Communication (summer 2013) and Technical Communication Quarterly (Winter 2015) have demonstrated the payoff of critically reflecting on methodologies, while several books have focused on research practice in general (Nickson & Sheridan, 2012 and Powell & Takayoshi, 2012) and feminist practices more specifically (Royster & Kirsch, 2012).

Following Sullivan and Porter (1997) in recognizing methodologies as entailing not just methods but also ideologies (i.e., value-laden networks of interpretation) and practices (i.e., the contextualized, variously constrained interactions involved in enacting and adapting research), the proposed set of essays point to several key methodological questions through which the rhetoric of health and medicine has been shaped, including questions about how to account for the sometimes unpredictable circulation and uptake of health and medical rhetoric, how to engage health and medical practices and their stakeholders ethically and responsively, how to foreground our contributions in collaborative research with medical specialists, and how to build new hybrid concepts with explanatory power for both medicine and rhetoric. Toward this latter end, the proposed volume embodies what Hartelius calls “sustainable scholarship,” which offers something back to the broader area of rhetorical studies.

In their POROI essay on inventional possibilities for the rhetoric of health and medicine, Scott, Segal, and Keränen (2013) document how the sub-field evolved from an offshoot of rhetoric of science to an area demarcated by a number of encyclopedia and bibliographic essays, journal special issues, conference workshops and panels, and published studies (both articles and books). Rhetoricians of health and medicine would benefit, they argue, from staking a “scholarly claim in a way that clarifies our unique contributions” while encouraging methodological collaboration and experimentation, including the merging of critical-analytic and social scientific approaches (p. 2). In addition, Keränen (2011) attempts to forward the emerging field’s identity through her definition of “biocriticism” as the “sustained and rigorous analysis of the artifacts, texts, discursive formations, visual representations, and material practices positioned at the nexus of disease and culture” (p. 225). Although she calls for an expansive version of biocriticism that that would apply the “full range of rhetorical analytics,” sometimes merged with tools from “allied fields such as anthropology, sociology, and science studies,” Keränen does not detail such hybrid methodological moves, and her use of “criticism” in the term “biocriticism” could suggest a focus on textual analysis (p. 238). The essays in the proposed collection extend, and challenge, Keränen’s call through specific, carefully contextualized examples of methodological inventiveness, and thus, offer nuanced discussions of how and why rhetoricians of health and medicine might study and interface with various publics, and in this way anticipate some of the methodological questions this volume seeks to answer.

What we want to consider is pushing against the more traditional approach of research methods (e.g., Whaley, 2014) to research methods and methodologies that are innovative and necessary in the messy research sites associated with health and medical discourse. In doing so, we move toward what Leach and Dysart-Gale (2011) called for when they encouraged the “formation of a corpus of rhetorical analysis in health and medicine for use by scholars and students” (p. 8), which Meloncon and Frost (2015) have ably shown the field is defined by its growing body of scholarship. As this volume will illustrate, rhetoricians studying health and medicine are increasingly mixing methods, merging theoretical traditions, foregrounding the ideological dimensions of their approaches to engaging medicine’s stakeholders, and yielding reconfigured concepts and novel insights with the potential to impact medicine’s high-stakes practices. In offering an expanded take on rhetorical methodologies, we hope this volume advances the larger goal of differentiating the rhetoric of health and medicine as a distinct but pragmatically multifarious area of study.

Chapter One: Unpacking and Highlighting Methodology for the Rhetoric of Health and Medicine

Chapter Two: Historical Work in the Discourses of Health and Medicine

Chapter Six: Bringing the Body Back Through Performative Phenomenology

Chapter Eleven: Negotiating Informed Consent: Bueno aconsejar, major remediar (it is good to give advice, but it is better to solve the problem)

Chapter Thirteen: Assemblage Mapping: A Research Methodology for Rhetoricians of Health and Medicine

One thought on “Research Methodologies in RHM”