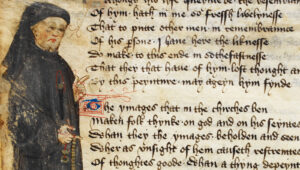 Chaucer: From the British Library

A persistent myth about the history of technical writing needs to be clarified. So that’s what this post is about.The myth I refer to is the long standing claim that Geoffrey Chaucer, better known for the Canterbury Tales, also wrote the first technical documents in English, Treatise on the Astrolabe. The Treatise has been dated ca. 1391 because that is the year that uses as his example in the text. Not unlike many of his educated peers, Chaucer was knowledgeable of many of the “sciences” of the era including astronomy.

The treatise is indeed a set of instructions that explains that the astrolabe can plot the movement of the stars and tell time, as well as several other functions. It is an important document in the history of technical communication. However, this notion that this is the first technical manual in English is simply not true. It’s simply one of the first that has survived and was noticed mostly because of the stature of Chaucer. 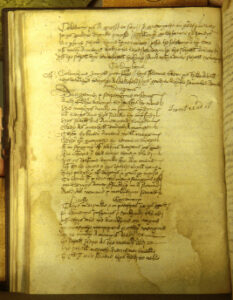 It’s important that technical communicators place Chaucer’s Treatise in a more appropriate historical context that marks it as one of many technical documents. From around 1350 onward, there was a dramatic increase in the number of documents written in English and translated from other more “learned languages” into English. Chaucer’s version is simply a translation or compilation based on a number of sources, which was a common practice of the time as more information moved into vernacular languages.

Like many students who may take a history or theory class in a technical and professional communication program, I was told about the Chaucer and his Treatise. I read with interest the Hager and Nelson’s classic piece (1993) on the Treatise, and then I ended up writing my master’s thesis and my doctoral dissertation on early technical manuals. I’ve been lucky enough to travel to archives in the US and abroad and trace the movement of technical information from manuscript to print.

One of the reasons I can say without doubt that we need to set aside the Chaucerian myth is that I’ve actually seen, held in my hands, and read in English texts that were older than Chaucer’s. In doing so, I can say without doubt that Chaucer was simply participating in a movement toward vernacular writings of technical and “scientific” information. By the time Caxton set up his print shop in the late 1490s in England, information had long been circulating in manuscript form in English. 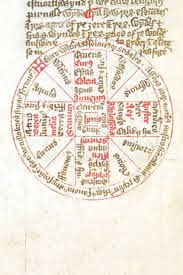 One technical text that pre-dates Chaucer’s that I know a lot about is Henry Daniel’s work on uroscopy. I’ve actually been able to examine some parts of this work in manuscript, and much like Chaucer’s work, Daniel’s is a translation/compilation of mostly Latin and Greek sources into the English vernacular. In the words of E. Ruth Harvey, Henry Daniel’s contribution to the history of medicine and his impact on Chaucer himself has been largely been ignored or unaccounted for in the literature. In part, much like what Shakespeare did for English language, Daniel did in some ways for medical and scientific nomenclature. In addition to his uroscopy he also wrote an herbal and between the two books he laid a vernacular foundation that Chaucer and many others to follow. 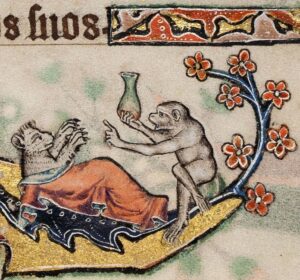 Another interesting feature of Daniel’s text are the jordans or matula’s that provide a visual rhetorical feature to help explain uroscopy. One can trace uroscopy through the use of illustrated jordans in hundreds of manuscripts and early printed books from 1375-1575. Participants at the 2015 RHM Symposium learned all about my fascination with uroscopy when I made a urine wheel part of the website header. For me, uroscopy and the urine wheel bring together so many aspects of my scholarly self:  technical documentation, visual communication, and communicating to lay audiences.

But the use of visuals as a way to supplement the information was a key innovation of Henry Daniel that persisted for hundreds of years and as I would claim laid the foundation for a visual communication theory as early as 1590. None of which had anything to do with Chaucer.

Also, if we set aside the myth of Chaucer and his being first, we open up the history of technical communication to the wide diversity of authors that influenced English vernacular work including the Persian polymath of Avicenna (whose thinking is instrumental in much of early modern medicine in the English vernacular). Moreover, many of the technical treatises I’ve examined have no specific author. They can be dated to era’s and educated guesses made about potential compilers or authors.

So many of the earliest technical texts are everyday texts. Just like any good technical communication, these everyday, vernacular texts were simply used to do things, to make things, to know things. Some were penned by scribes within monastic culture; others were likely penned by gentry who were often the compilers of the knowledge that helped make estates run. Some of my favorite medieval letters (the Paston family)  contain so many minor technical how-to’s were written by women who functioned in an exchange of information.

Absolutely, Chaucer is an important part of the history of technical and professional communication, but care must be taken when making sweeping claims of firsts and innovation. These myths can help with popularization and lay understanding, but they also risk us losing out on equally important writers and documents. There is much history of TPC still to be written.

As scholars and practitioners write necessary chapters, we would be well served to look beyond the obvious or the famous and look to the vernacular, where the ephermeral everydayness just gets things done.