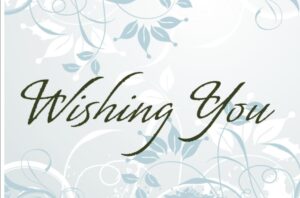 Since I’ve not blogged much this year cause I am still chair of a big academic department and that takes up so much more time than anyone would likely guess (unless you’ve sat in a similar seat), I have been thinking for awhile about what I would use as the central theme to this blog post.

I knew I would need to think of it well in advance to be able to find the focus to get it written. The past several years I’ve written a post similar (2018, 2019, 2020, 2021, 2022), and I do find that they help set me off on the new year in a good frame of mind. And more so, they are reminders throughout the year when I need to be reminded :-)For my family that may be reading this post in particular, these blogs are about being a professor and doing that job. But this first post of the year is one that is broader to more folks and in many ways more personal to just me and what’s been on my mind as a I reflect on the past year.

This morning when I was adding the older posts to this space**, I realized that these wishing you posts did capture in a public way the private trials and successes of the previous year. I was heartened that not only did they capture the past year that they also moved to consider how to make this new year better or stronger or different or [choose your word here]. I’ve never been a big fan of resolutions. They seem to place too much pressure on us in ways that almost set us up to fail. 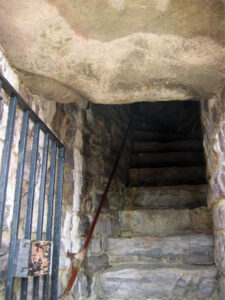 Instead, the words I’ve chosen for a new year—to wish for me and others—are simply meant to help think about ourselves and how we interact with the world a little differently. Surprising few people who know me (personally or professionally), I’ve always been one who sort of took the world head on with an enthusiasm and energy. While I have gotten a bit slower and more patient (and more reflective) as I’ve gotten older, I am still very much the little restless soul that my grand-mère always called me. She  would tell me when I was little, “ecoute, chère, petite étapes.” (listen, dear one, small steps.) It was a reminder that I needed to slow down and the small steps would eventually add up into bigger ones.

This idea of incremental process was always the start of her reminders to me—and later my daddy’s reminders—that to make any change or achieve any goal, even when we’re afraid of it, means taking a small step. That step, however, often takes courage.

Courage comes into the English language via Latin and French. It’s root, “cor” is Latin meaning heart, and in the middle English usage of courage had it in many contexts still meaning heart or the center of feelings and beliefs. Our modern usage often does not refer to the older definitions and courage’s connection to the heart and feelings, but even with the modern usage of the “ability to do something that frightens one” or to “have strength in the face of difficult times” or to “offer support or hope” (in conjunction with other words such as take courage).

Moving into this new year, I want to invoke all of courage’s meanings without losing sight that it is connected to our heart, the essence of who we are and who we want to be. 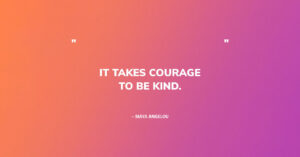 Courage to try new things. I recently wrote about what the next stage of my career may look like when I am no longer chair, and that got me to thinking about other aspects of my life that I have let sort of stagnate. As a teacher, getting students to try something is often the hardest part of it because they have to have courage 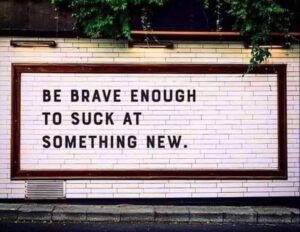 to know they won’t be good at it the first time they try. I need to take my own teaching advice. For example, I used to take so many photos. It was something that I did because I enjoyed it, and even if with phone technology improving, there is nothing like getting just the perfect shot with a camera. And if you’ve ever taken photos with a camera, you know that so many of them are just not that great. Now, this isn’t something new, but I do want to try and pick up old things and try new things. It takes courage especially to try something new because we have somehow been taught that unless you’re perfect or great at something it’s not worth doing. And that’s totally not true at all. It takes a different mindset—maybe even a courageous one—to try something even though you know you may not be good at it (at first or even ever).

Courage to be our best selves. It’s really easy to forget to be kind to ourselves. We are often our harshest critics and consider too often about what others may think of us or about us. If there was one thing that was a gift from my parents (and my grandparents), I came out of the womb with a confidence to not let what others thought bother me. But as I grew up and left home, I realized how much of a gift this truly was. Though, even I struggle under the expectations of what I’m supposed to be rather than who I am and who I want to be. It’s easy to get sidetracked and forget some of the fundamentals in the busyness of our everyday lives. To love ourselves and each other unconditionally takes courage, and it is likely the hardest courage of all.

For the coming year of 2023, I wish each of you the courage to take step(s) you need to take. 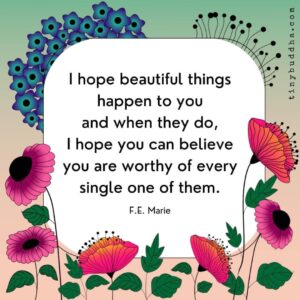